Taking the stage for their short but fiery 5-song set, the four musicians better known as Mayve proved beyond any reasonable doubt that they are poised to climb the next rung in the proverbial ladder of success. Their well-crafted songs are instrumentally and vocally arranged in a manner that highlights the individual strengths of each band member while merging to form a sound that they can truly claim as their own. This, in itself, is an all-too rare achievement these days, given all of the … ahem …. creatively challenged groups of hacks somehow finding their way onto radio airwaves that were, at one time, reserved for real musicians. “Wait just a f***ing minute!” you might cry out. “What do you define as “creatively challenged” or “real musicians”??” “Well,” I might respond, “you could have tuned into virtually any radio station years ago and heard artists who actually stood out from each other – and while they may have certainly been influenced by each other, they never stooped to the levels of near-apelike mimicry that seems to be the norm among music aimed towards younger listeners … the so-called "core market” of the recording industry.

Anyway, I digress … where was I? Oh … Mayve. The rhythm section of bassist Mike Gusman and drummer Vinny Nuzzi are one of the tightest I've heard in a long while, providing a solid launching pad from which lead guitarist James Smith and vocalist/guitarist Nick Micheline are able to take flight. Smith uses his guitar effects to create an almost symphonic layering of melody upon intricate chordal voicings, while Micheline's lean, propulsive rhythm guitar hovers just underneath a tenor voice that wraps itself effortlessly around the lyrics' melody.

Speaking with bassist Mike Gusman after the set, I learned that the band is relatively fresh out of the gate, having formed in February 2012. Gusman is the most recent addition, having joined the band in May. Given what I had just witnessed onstage, I asked Mike to explain how the band was able to get itself to that level of performance. The answer? Practicing two nights a week for four straight hours. These musicians know how to use their time productively!

Just take it from someone who was fortunate enough to have been exposed to a great number of real musicians who were creatively blessed during my years involved with Long Island’s original music scene: Mayve is the real thing on Long island today. Combining songs that actually make you want to listen with a compelling live performance that defines the band as professionals, Mayve offers an alternative to the glut of sound-alike bands heard all too frequently on the radio these days. With their combination of innate talent and an outstanding work ethic, Mayve is doing everything right. My prediction? If they continue on this path, commercial success will surely find them. Find out more about Mayve at www.facebook.com/mayvemusic 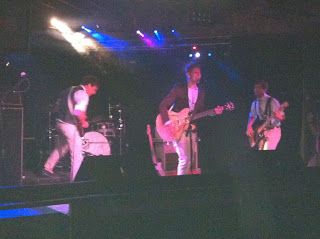 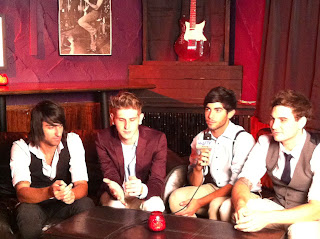 Posted by Roy Abrams at 9:25 PM No comments: